Resources of the Month - April 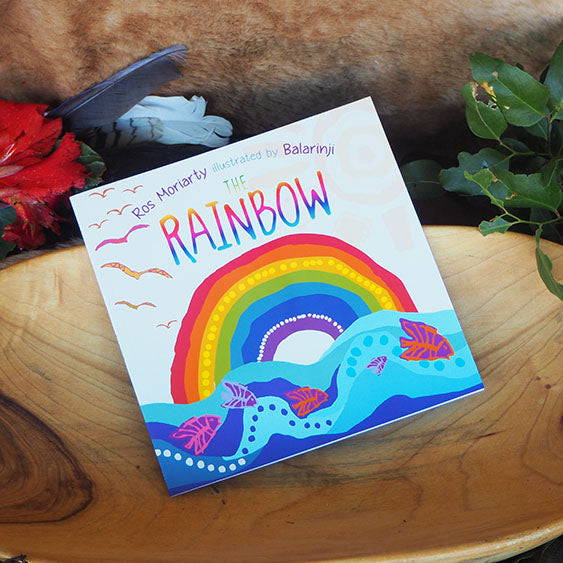 A perfect read-aloud story which revels in the kaleidoscopic colours of the Australian landscape featuring Indigenous art by Balarinji.

A joyous serenade to colours that show country before a storm, illustrated by Balarinji, Australia's leading Indigenous design studio.

Ros Moriarty, author of the acclaimed memoir Listening to Country, is also the founder of Indi Kindi early learning program.

Our Island : Children of Gununa by Alison Lester & Elizabeth Honey

Our island lies beneath a big blue sky, surrounded by the turquoise sea. Turtles glide through the clear salt water, and dugongs graze on banks of seagrass.In this lyrical celebration of place, the children of Mornington Island explore their home in words and pictures. This is a collaboration with much-loved children's picture-book creators authors Alison Lester and Elizabeth Honey. 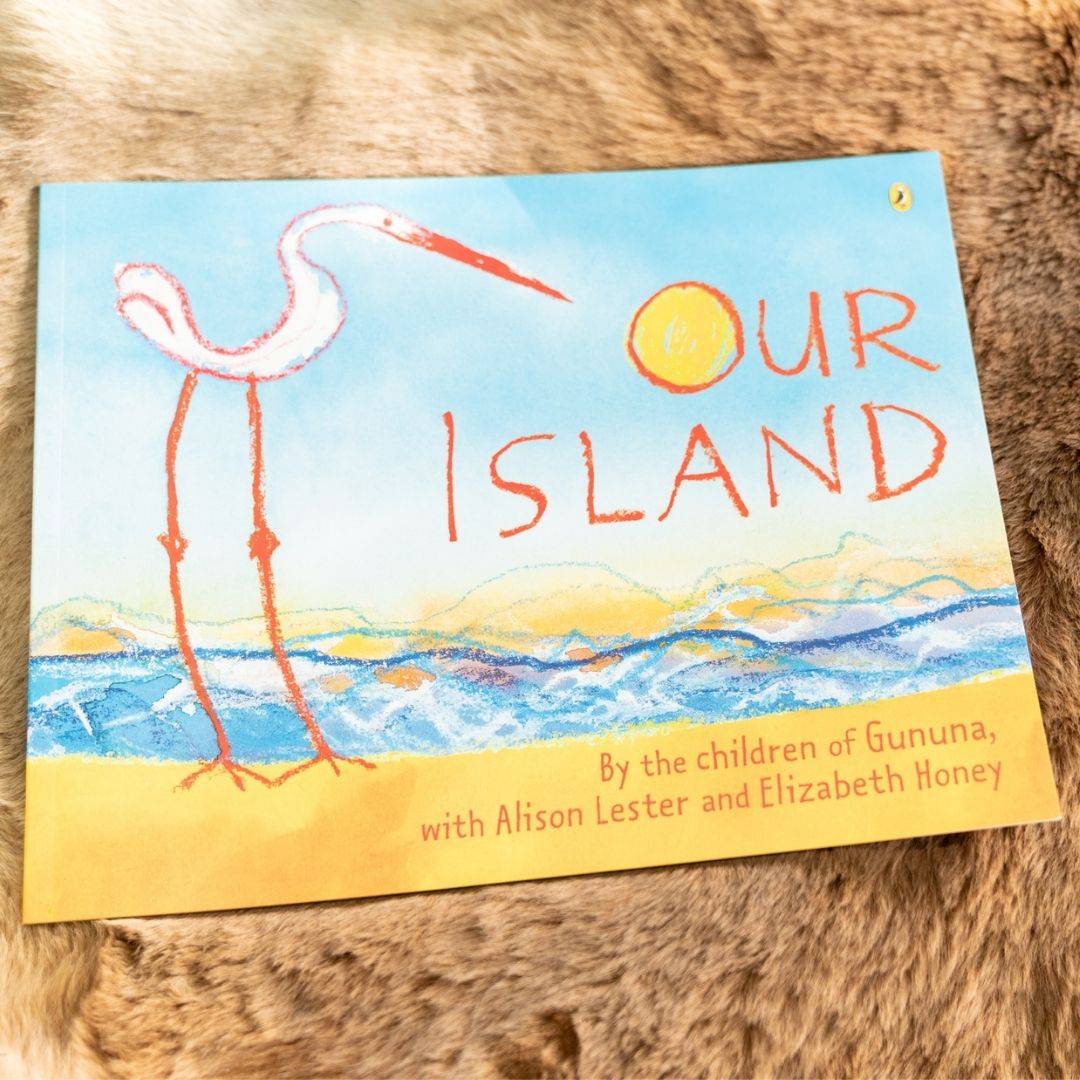 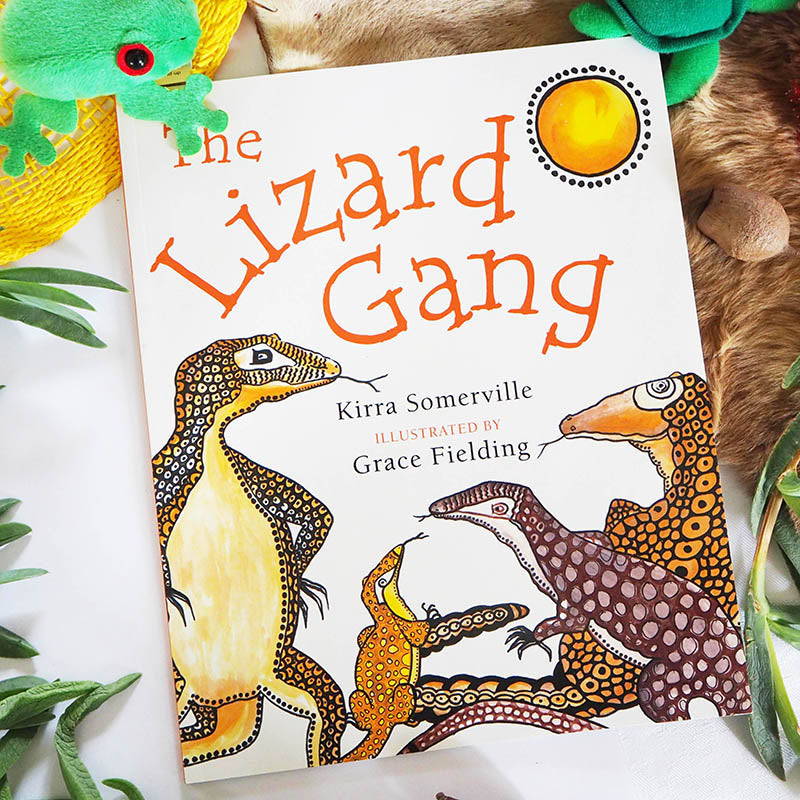 The Lizard Gang by Kirra Somerville

Meet Zed, Boo, Eliza and ZoroÑa spirited gang of monitor lizards who are constantly trying to outdo each other. They live deep in the Australian bush and are forced to learn the real meaning of teamwork when they have to band together to escape a raging flood.

Billie wants the blue bike and she asks her Mum to buy it for her - but her Mum has no money to spend on a bike. She asks Uncle Jack and he won't give her the money either, but he will help her save up to buy the bike herself. She can work for him for $10 per week for 10 weeks to save the $100 for the bike. But Billie is impatient, and she tries washing cars and even enters her dog Spike in a dog contest - neither of which works out. She eventually she goes back to Uncle Jack and saves the money in 10 weeks - and she is able to purchase the bike!

Billie and the Blue Bike is a fun and engaging way to introduce young children to financial literacy knowledge, and is written for Indigenous children in particular. This brightly illustrated and instructive picture book, written and illustrated by the award-winning Ambelin Kwaymullina, has been designed to include financial literacy learning relevant to students at a Year 2 level.

Billie and the Blue Bike references the National Consumer Financial Literacy Framework, which sets out three dimensions of learning that underpin consumer and financial education: knowledge and understanding; competence; and responsibility and enterprise. Teachers and parents can use the book as a resource to help children understand core financial literacy matters through storytelling. 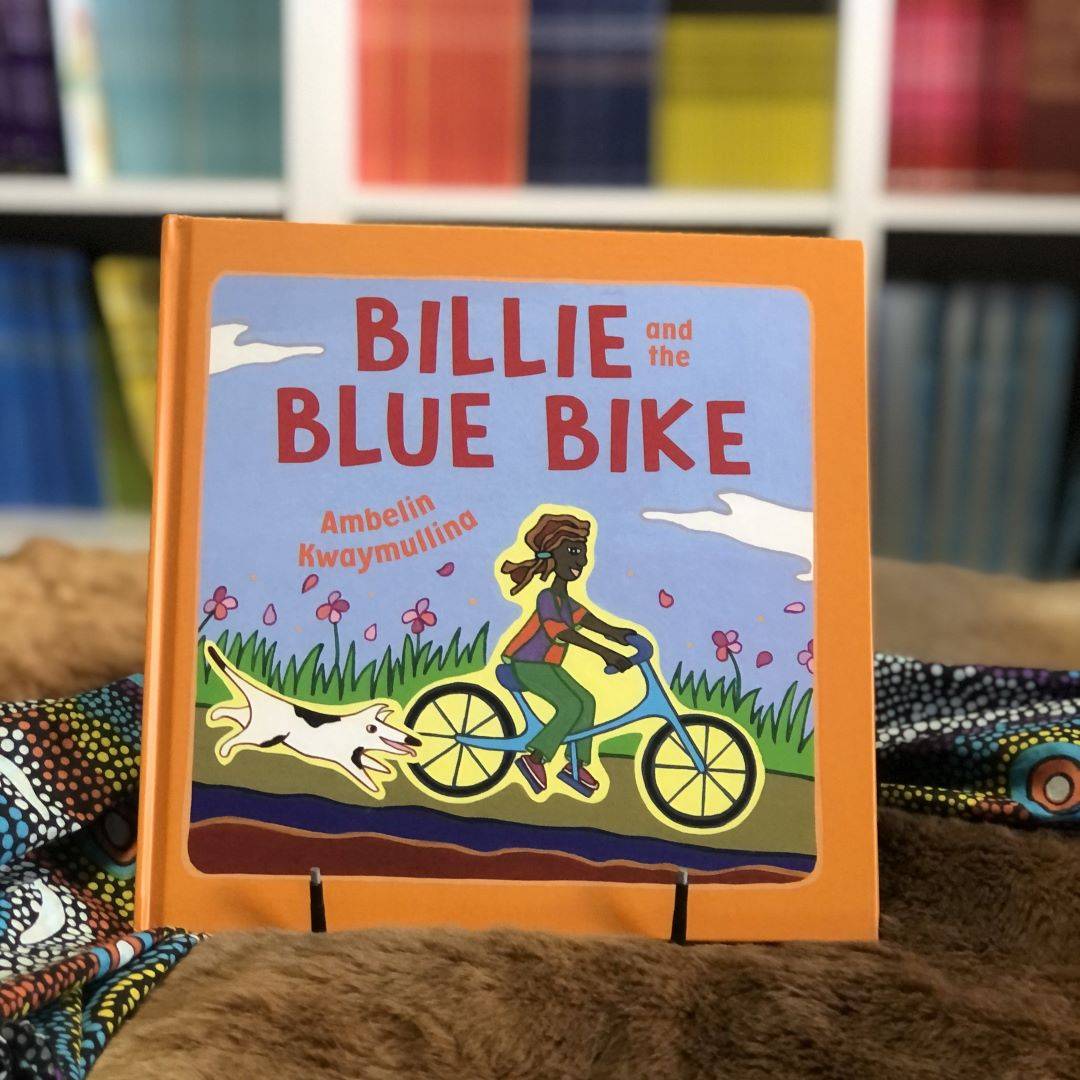 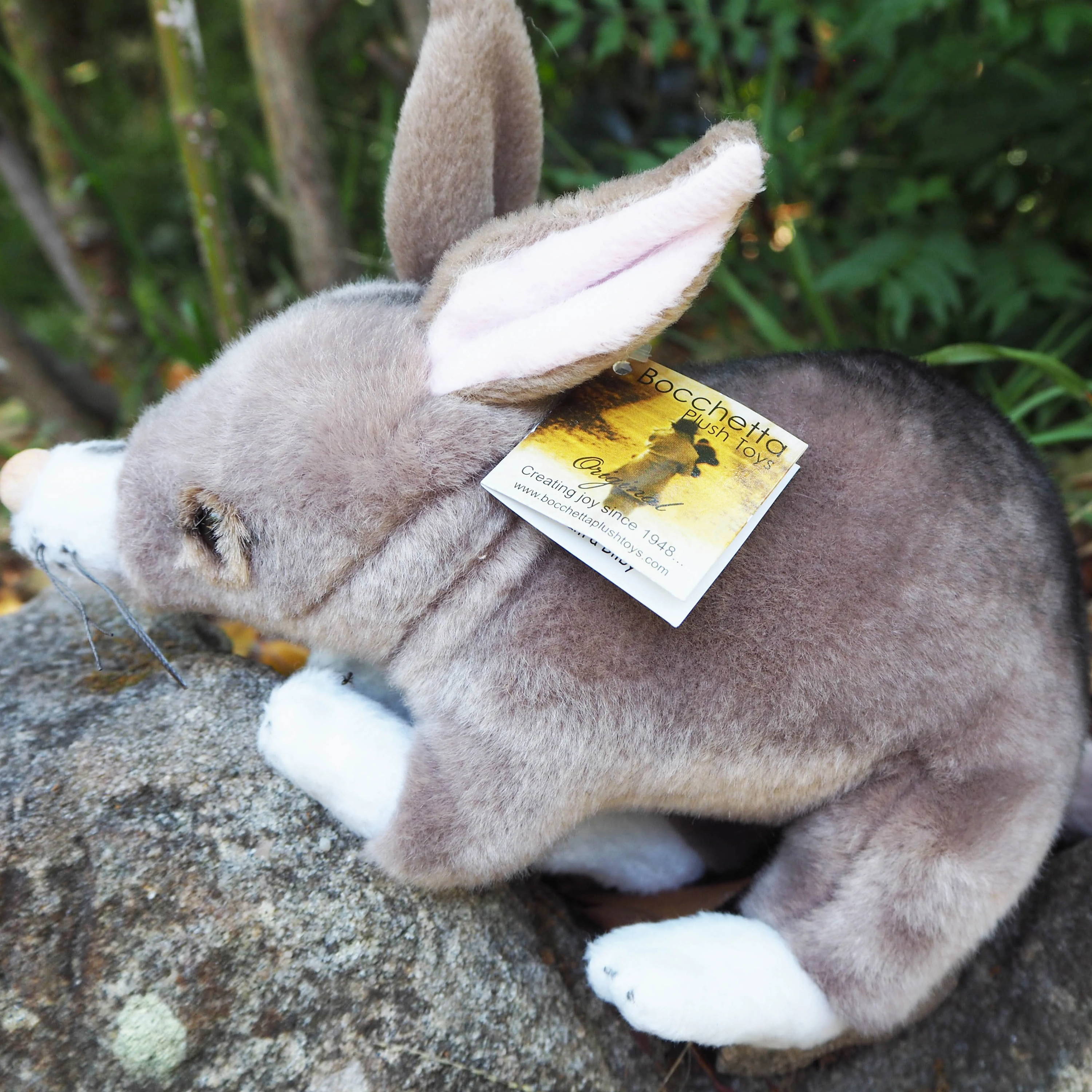 The Bilby is a shy, nocturnal, marsupial unique to Australia. It has a grey and white silky coat, long sensitive ears and a pink nose. It has thick claws and strong limbs that help them to dig rapidly in the desert soil. These beautiful creatures live for about 10 years. Belinda is very huggable and cuddly though.

* Made in Indonesia, All new materials
* Hand Washable
* Suitable for ages 3+
* Measures 11 inch / 28cm long (not including tail)

A Home For Bilby by Jeannie Baker

It was a sunny day in the Australian bush and a happy place indeed for many of the animals that lived there. They were all playing and having fun. No-one saw the little animal sitting alone under a small tree. 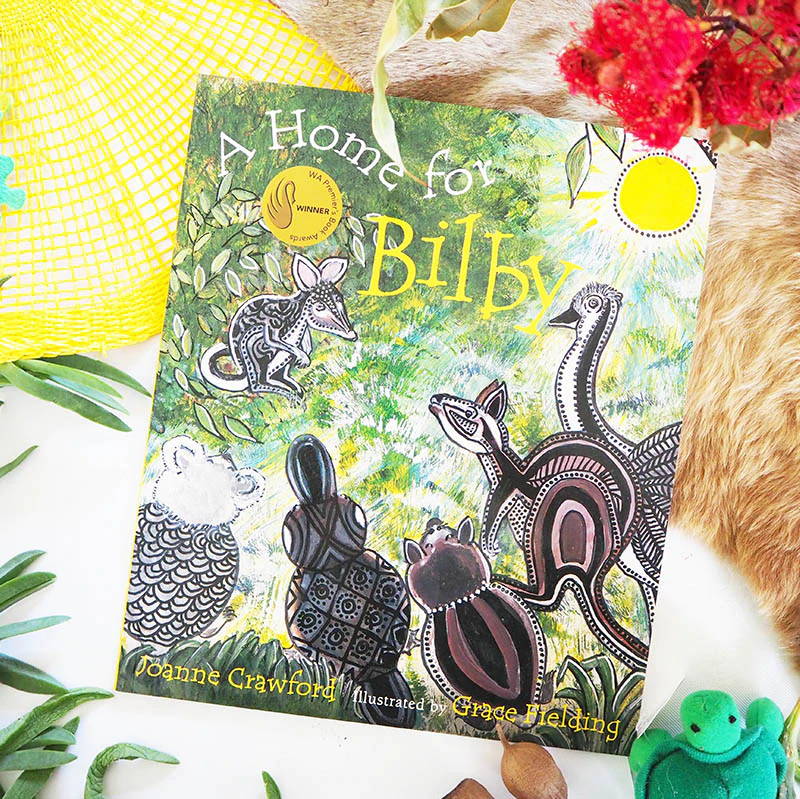 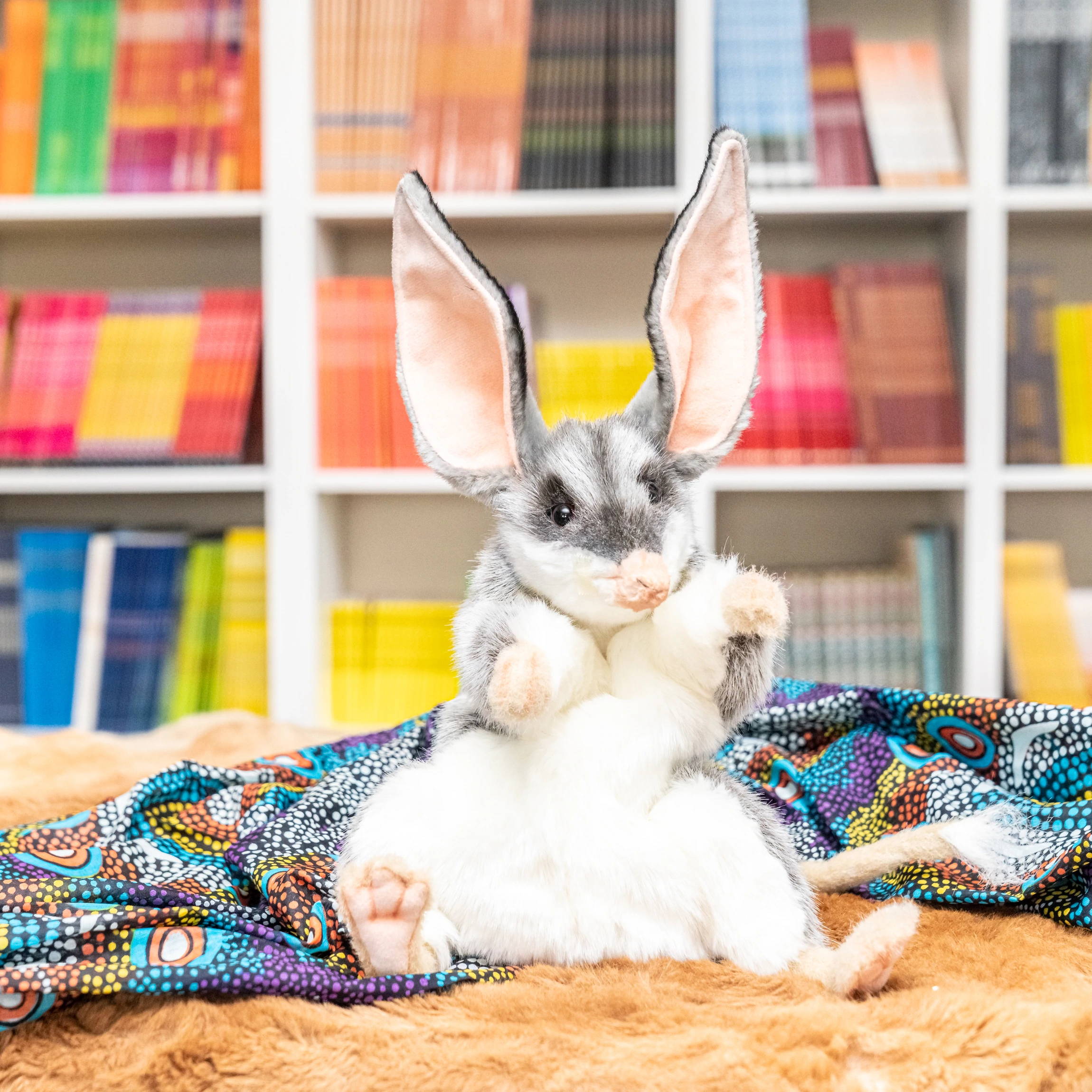 From the Australian collection, this delightful Bilby Puppet will snuggle into your little ones arms and light up their heart.

Covered in supersoft, fluffy faux fur and long fluffy ears our Bilby is ready for cuddles. Her fluffy grey fur has been hand trimmed to highlight her sparkling eyes.

These hand painted Aboriginal art decorative eggs are a great way of making art tactile and tangible for young children. They are the perfect resource to add into a sensory basket for under two's.

With each order you will recieve 5 decorative eggs from a variety of traditional Aboriginal artists. 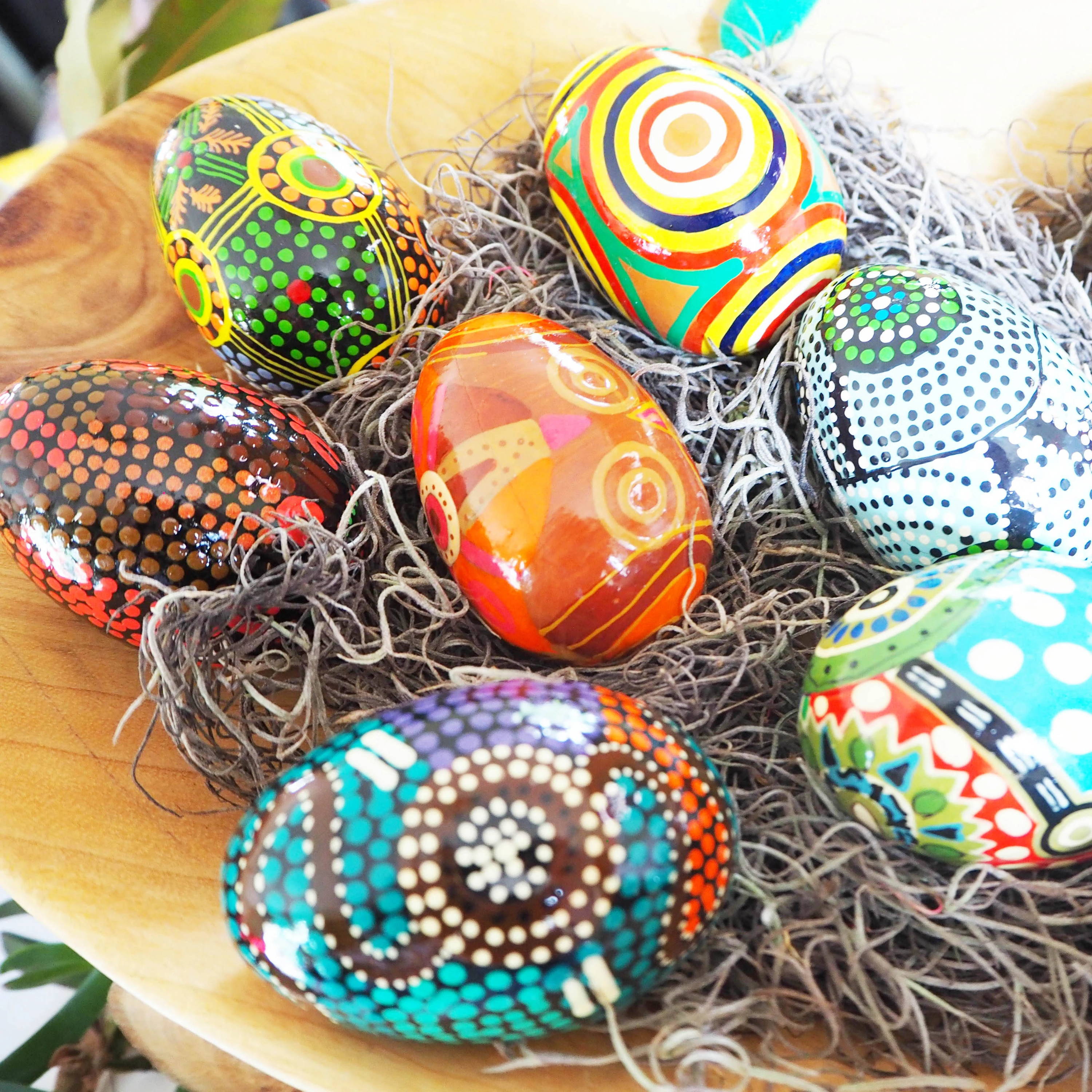 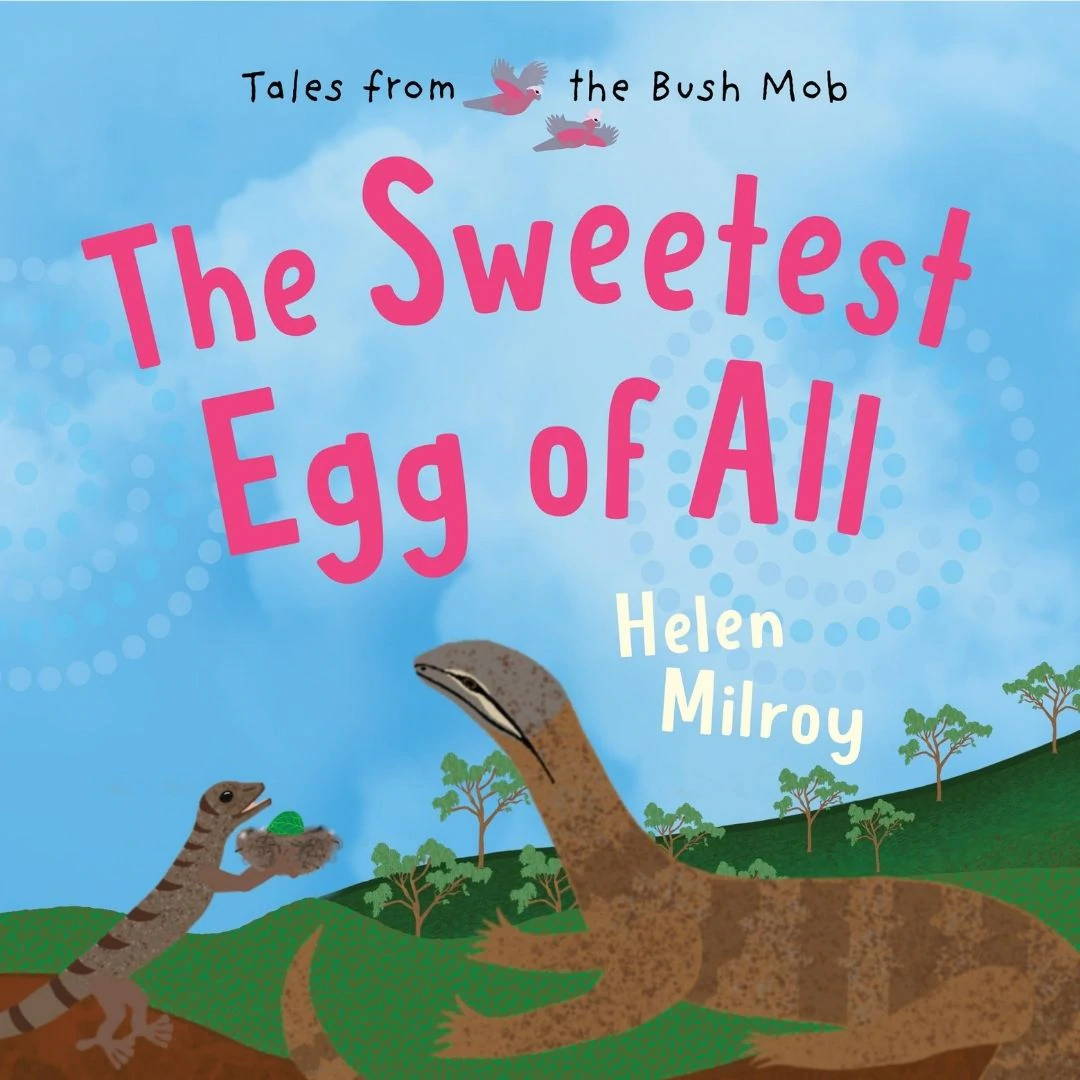 The Sweetest Egg of All: Tales From the Bush Mob By Helen Milroy

Tales from the Bush Mob is a series of books about the Bush Mob, a group of animals who work together to solve problems. Each book shares a rich landscape of characters and places, including Lofty the emu, Willy-willy Wagtail, Eagle, Sugar Glider, Bat, Platypus, Koala, Wombat, Kookaburra, Echidna, Kangaroo. These stories emphasise the value of respect for First Nations culture and country, as well as the importance of courage, perseverance and wisdom to bind communities together.

The Sweetest Egg of All is the third book in the series, and follows Gecko, Thorny Devil and Scrubby Python, who admire Bungarra and want to find a special birthday present for their friend. When they hear from King George Brown (KGB) that Willy-Wagtail's egg is the sweetest egg of all, they hatch a plan to steal an egg for Bungarra's birthday. But KGB and King Toad have different plans for the sweetest egg of all and now Dingo and the Bush Mob go into action to save Willy Wagtail's egg.

Filled with gorgeous illustrations and exciting tales, this will be a popular book for the whole family. 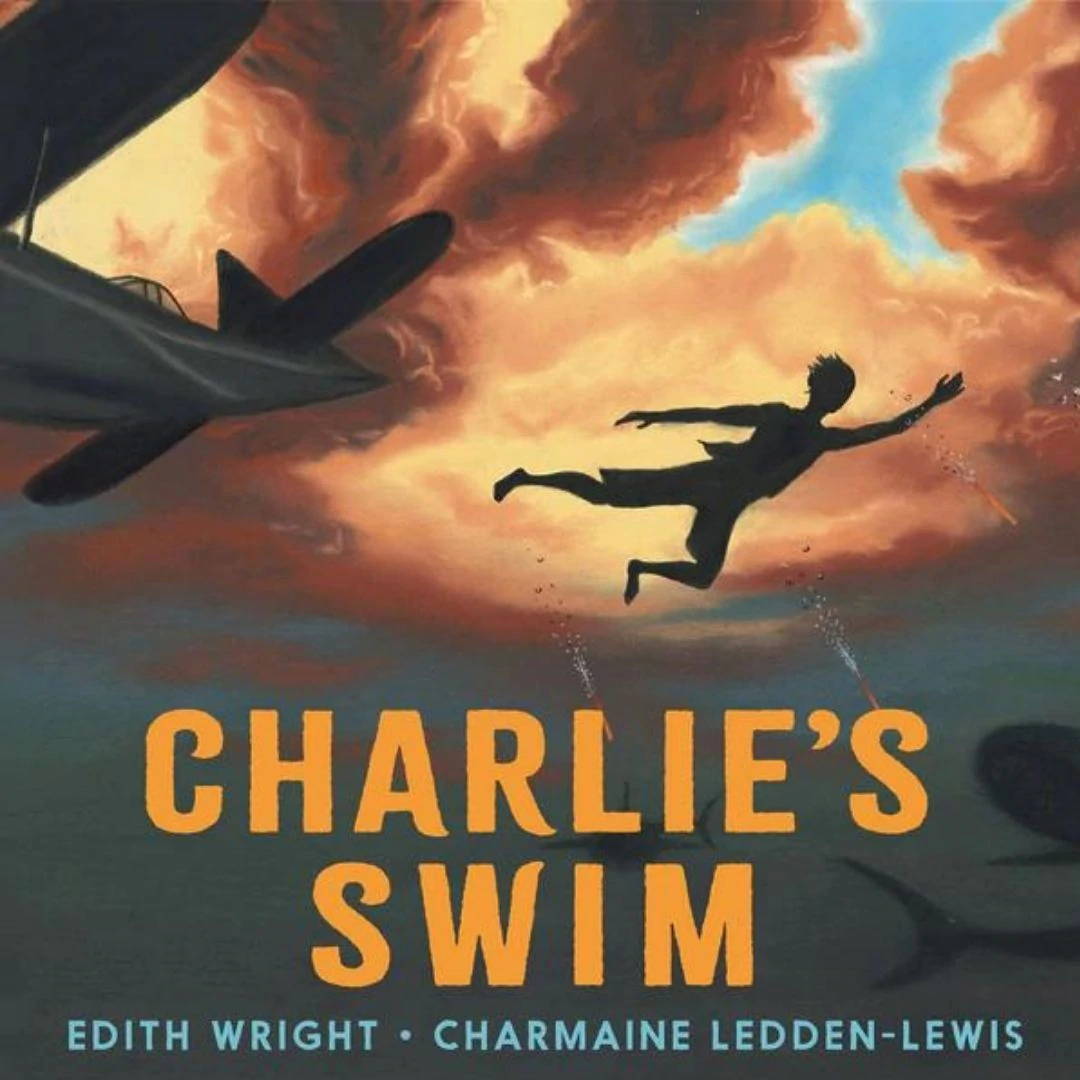 During WWII after the Japanese invasion of Java, more than 1000 refugees from the Dutch East Indies, many in flying boats, passed through Broome, which was a major refuelling point and a significant Allied military base. On 3 March 1942 Broome was attacked by Japanese fighter planes, killing at least 88 civilians and Allied military personnel.

Charlie’s Swim is based on the true story of the author’s Uncle Charlie (Charles D’Antoine) who was working inside a flying boat when the attack began. In the midst of flying bullets, blazing fires and sharks, Charlie saw a woman and child desperately trying to keep afloat and without hesitation went to their rescue.

In 1944, Charlie was awarded a Certificate of Merit from the Royal Humane Society of Australasia in recognition of his efforts and he was awarded four medals for bravery from the Dutch government. It took a further 80 years for the Australian government and military to formally recognise this bravery.

A powerful and moving story about true mateship.

Jimmy and Johnno are best mates. The two young friends do everything together, sharing adventures and growing up side by side in the dusty cattle yards of an Australian Outback station. When World War One strikes, they head overseas to fight on the battlefields of the Western Front. Two boys from different cultures. A friendship for life. 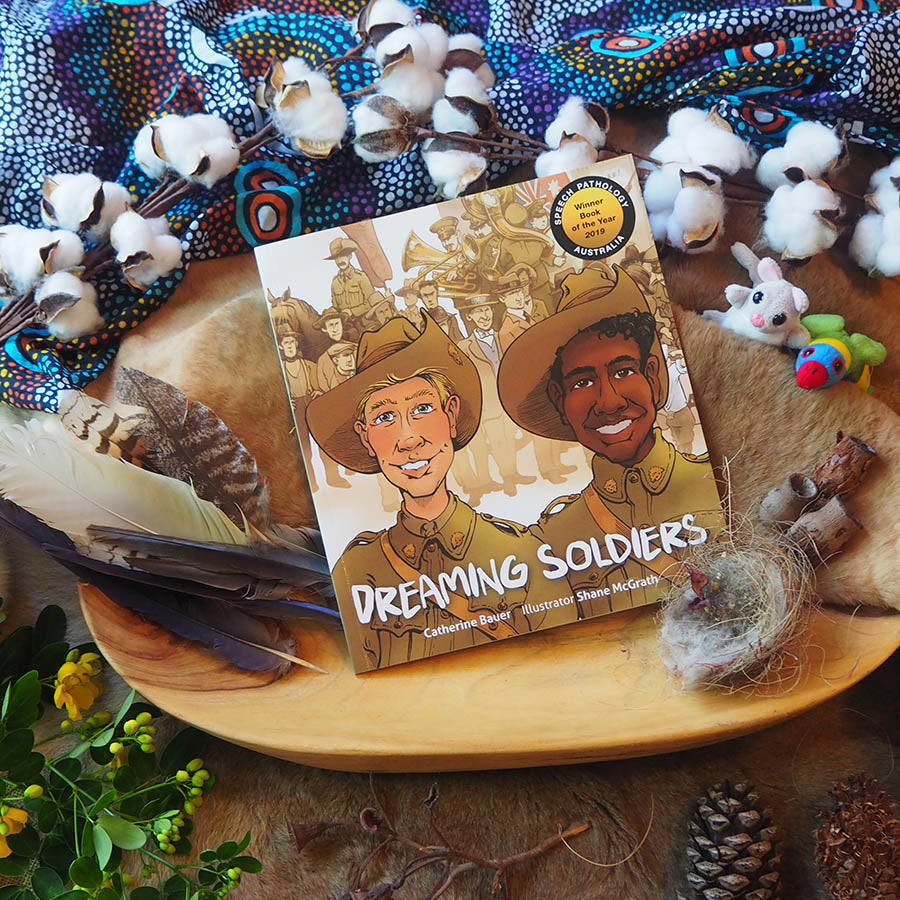 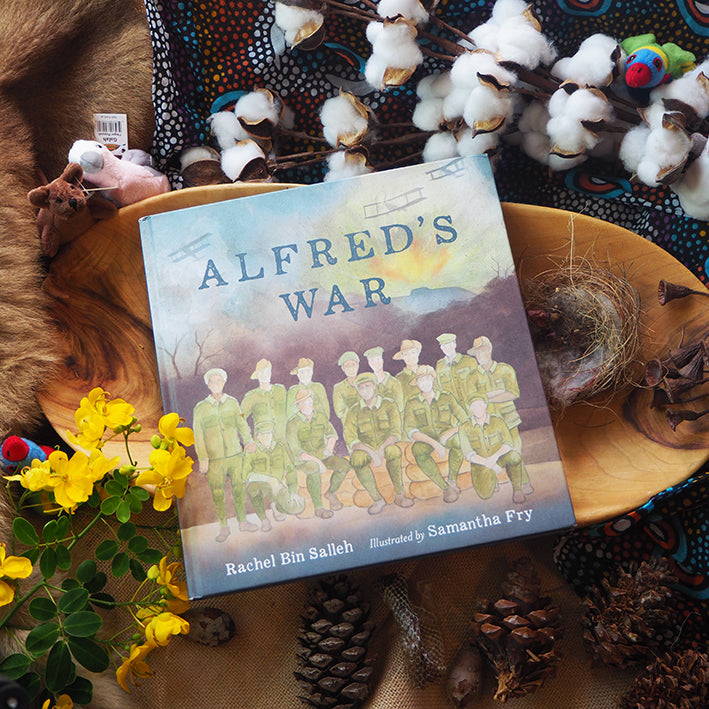 Alfred’s War is a powerful story that unmasks the lack of recognition given to Australian Indigenous servicemen who returned from the WWI battlelines.

After decades of silence, Serving Our Country is the first comprehensive history of Aboriginal and Torres Strait Islander people’s participation in the Australian defence forces.While Indigenous Australians have enlisted in the defence forces since the Boer War, for much of this time they defied racist restrictions and were denied full citizenship rights on their return to civilian life. In Serving Our Country Mick Dodson, John Maynard, Joan Beaumont, Noah Riseman, Alison Cadzow, and others, reveal the courage, resilience, and trauma of Indigenous defence personnel and their families, and document the long struggle to gain recognition for their role in the defence of Australia. 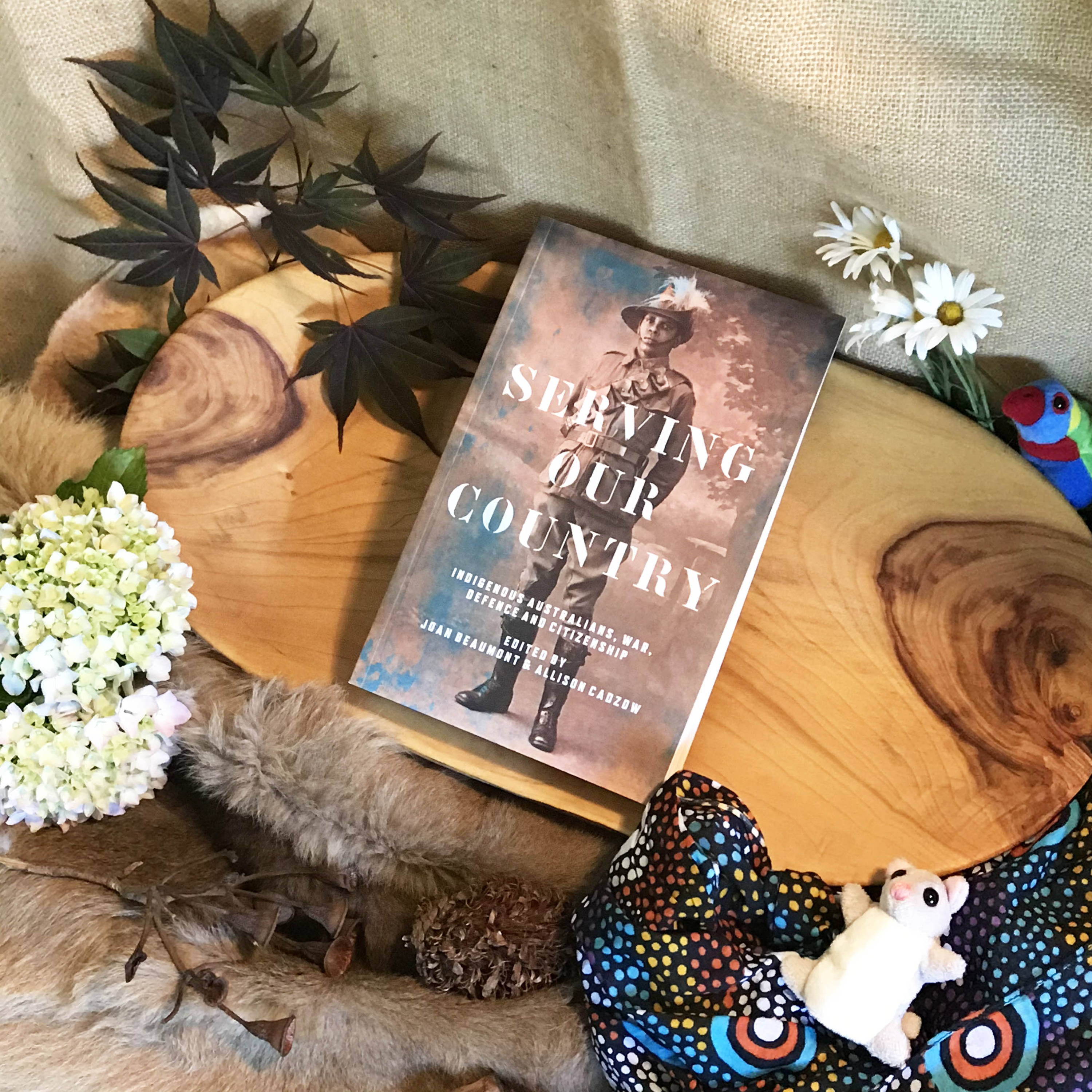 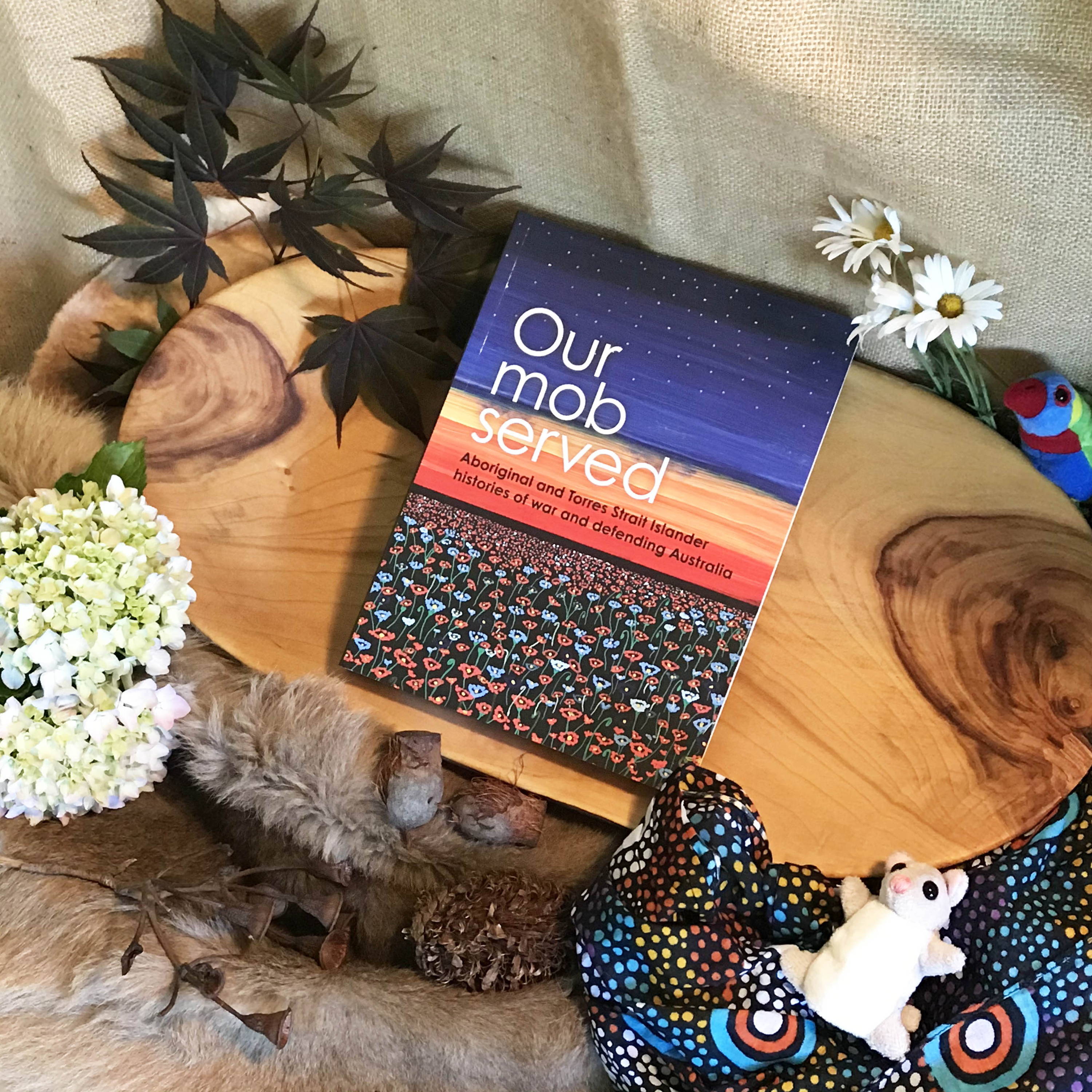 While Aboriginal and Torres Strait Islander people have been largely ignored or marginalised in national histories of war and service, they have remembered their involvement in Defence service and the service of their relatives.

This unique book shares lively and compelling stories of war, defence service and the impact on individuals, families and communities, sometimes for the first time.

For Country, for Nation: An illustrated history of Aboriginal and Torres Strait Islander military service by Lachlan Grant

Warning: Aboriginal and Torres Strait Islander readers are advised that deceased people are represented throughout this publication.

Richly illustrated with over 230 images, For Country, for Nation uses artworks, photographs and objects from the Memorial's collection, combined with the voices of Indigenous men and women, to reveal their experiences of war. In doing so, For Country, for Nation considers why so many volunteered to serve when faced with entrenched discrimination in wider society. 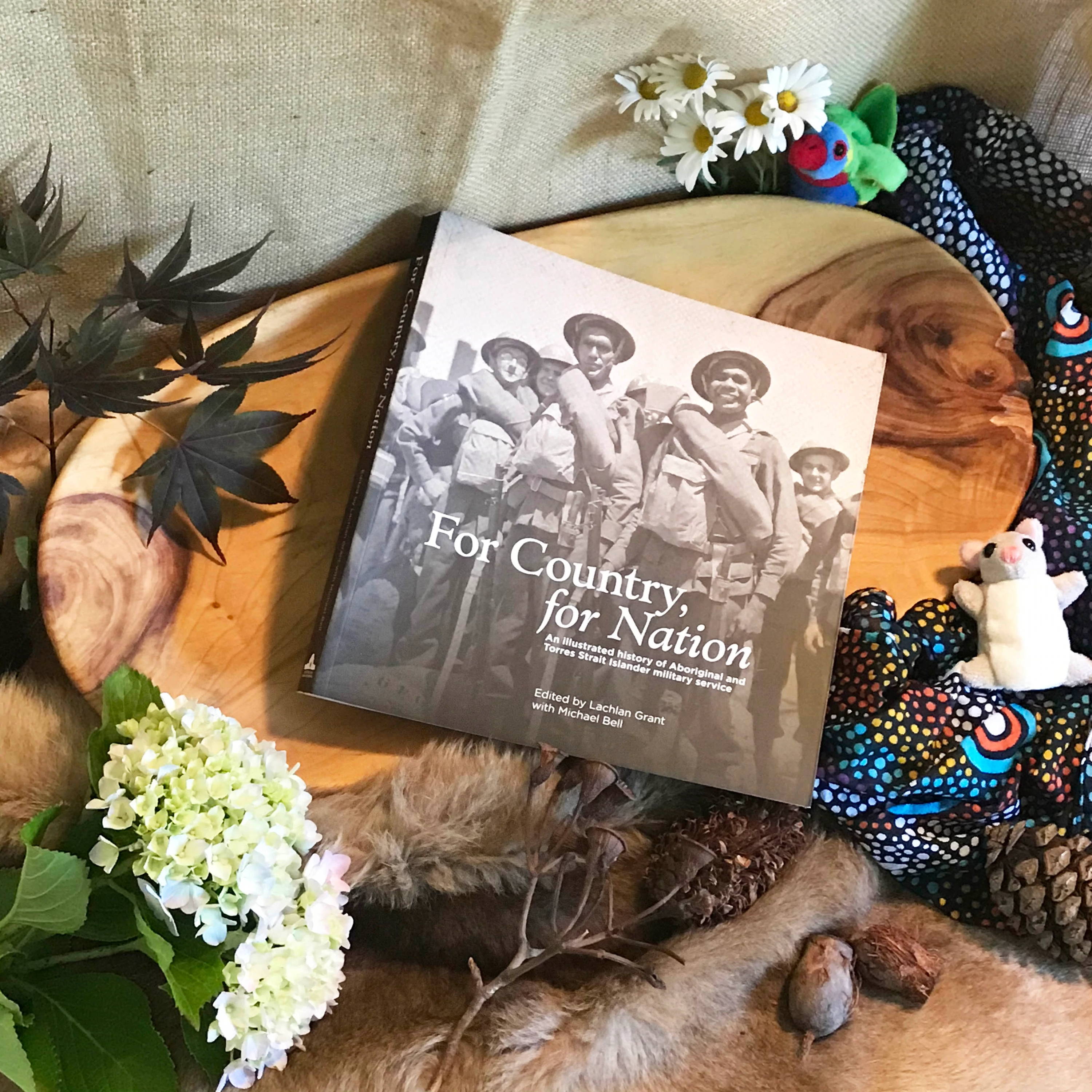